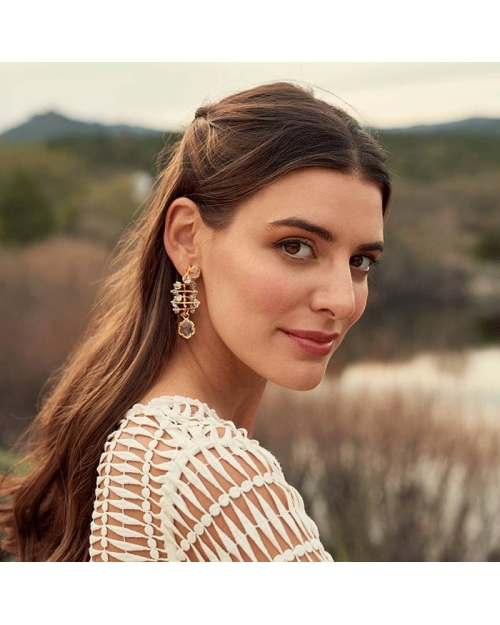 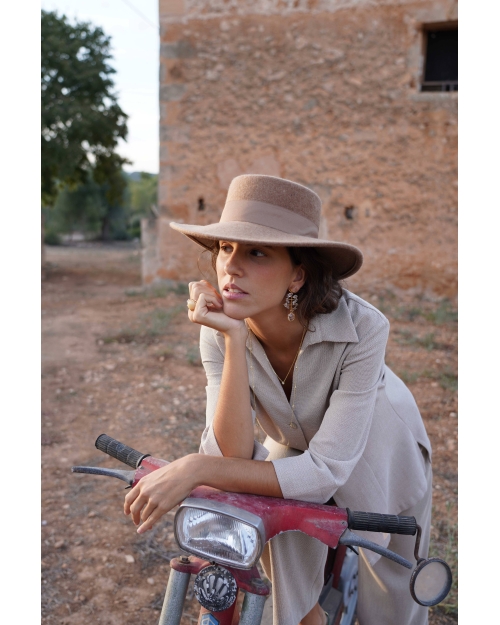 Golden silver earrings with hand-carved natural stones with a design inspired in winter for bringing elegance nd sparkle to the coldest days. With irregular shapes that remind us of the ice and the purity of it's stones, this earrings will be your favorite this season.

We got our inspiration from the most imposing glaciers, the coldest waters and the purest ice for creating a collection of jewels that makes a winter paradise. But the Antártida collection hides much more that winter inspiration, it is an ode to the wonders of nature and, above all, a call to attention for taking care of it. We often forget this nature we used to cherish and take care of, forgetting it's power and fragility. This is why today we get inspired by it, for honoring and reproducing it.

It is with pure as nature stones that we created this collection, with irregular shapes that resemble ice and curve lines to represent the change they suffer. Stones as Herkimer quartz, knows for it's similarities to diamonds, or the colorless quartz, the most similar to ice and as transparent as crystal. The shapes and colors of this jewels reproduce the nature on it's wildest state, giving way to the snowy mountains and the secrets of the not yet explored continent, turning them into jewels of sofisticated air and modern designs.

One of this secrets is the ship called HMS Erebus, which was the inspiration for this piece. This ship took part of an expedition to the frozen continent en the XIX century, which sunk and was recently found. A pair of earrings with the nature look of Herkimer quartz, a mineral that given it's light is often confused with diamonds and is often called Herkimer diamonds.

A detachable jewel that can be combined with our My Coolook collection for creating really unique and personalized earrings.

What is Herkimer quartz?

The "Herkimer diamonds" are a variety of quartz, of double termination which are not usually carved and that, as diamonds, are usually transparent and have a lot of sparkle. Many times they have inclusions of black atraxolit.

It is believed to have the power of unifying body, soul and spirit, creating great emotional and spiritual strength.

They were found for the first time in Herkimer, New York, were the best pieces are still found

What is colorless quartz?

It is also called cristal quartz or rock cristal, it is the quartz on it's more pure state. It is completely colorless since it has no impurity that affects their transparency. It is mainly found in deposits but also in the Earth's core since the magnetic field feeds off this mineral. It has great healing powers, enhancing the therapeutical effect of all other minerals. It is said that this natural stone helps with healing any illness, generates positivity and prevents bad energies.

The main deposits are found in the United States.